The Sterling Organ Company was founded in 1845 in Birmingham (now downtown Derby), Connecticut by Charles Sterling of Sharon, CT. He married the sister of prominent resident Edward N. Shelton, and relocated to Derby before opening the factory.

In 1860, the company added pianos to their line. After the Civil War, parlor organs became more popular, especially with the large amount of sentimental ballads that developed from that conflict. Young ladies were trained en masse to play these pianos.

A large fire destroyed the plant in 1875, but it was quickly rebuilt, and by 1879 the factory was double its original size. By 1884 organs made only a small percentage of the company's output, and the company was known as Sterling Piano. The company enjoyed rapid growth, becoming a large factory complex along the Birmingham Canal on Water Street. The buildings were mostly made of wood, and were painted white, presenting a startling contrast to the brick factories neighboring the Sterling on the canal.

Charles Sterling served as president of the company until his death in 1887, at which time the company’s major stockholder, Rufus W. Blake, succeeded him. The company was a closed corporation, with only five stockholders.

In 1893, a branch factory was built across the Housatonic River in Shelton, called the Huntington Piano Factory. The pianos made here were less expensive than the Sterlings. Many of them were player pianos, which could play by themselves using "drums". This was one of the first American examples of "canned" music, which has evolved from the drums all the way to today's compact disks. Like the Sterling Pianos, the Huntington Pianos were noted for their quality.

In 1896, Sterling Piano was one of the largest factory concerns in Connecticut's Lower Naugatuck Valley, composed of 16 buildings fronting 640 feet along the canal and railroad, several drying kilns, and two waterwheels. Its capital that year was $210,000. A spur track maintained by the New York, New Haven, and Hartford railroad ran long the rear of the complex. Sterling and Huntington Pianos were shipped across the country, and all over the world, especially South America. Some even found their way onto American battleships. 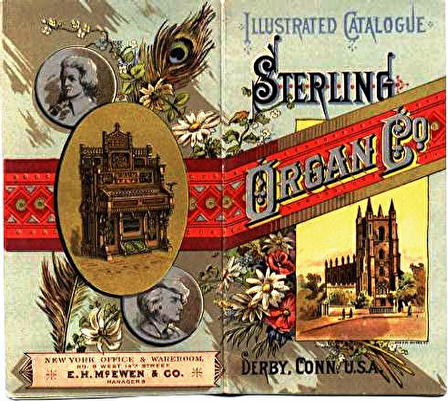 Company literature described the construction of the pianos as: “…made with a full iron frame covering the entire wrest plank, giving perfect solidity and firmness. The sounding boards are from carefully selected spruce, no soft pine of any other material being allowed to enter into this important part of the instrument. The backs are built up very strongly, and the instruments are constructed with every regard for durability. The scales used are the most perfect and thoroughly tested and thoroughly even throughout, and the tone produced in the Sterling is noted for its long sustained or singing quality. It is by superior tone, easy action, beauty of design, and honest make, that the Sterling has made a favorable debut in all the large cities of the United States, Mexico, and Central America, while agencies have been established in several European cities”.

The beautiful Sterling Opera House opened in 1889 across from Derby Green (a downtown public park). The Opera House, was the first structure to become a Connecticut Historic Landmark. Closed since the 1960s, it is now undergoing restoration.

Both the Secretary and the wife of the Treasurer of the Sterling Piano Company, who were siblings, were on the Titanic for it's ill fated maiden voyage in 1912. Both survived the ship's sinking after it collided with an iceberg.

A fire forced the Huntington Piano Company to close in 1922. An attempt by Steinway to buy out Sterling Piano was refused by local management, and the popularity of radios cut deeply into sales. Sterling Piano closed for good in 1926. The Sterling Piano buildings were subsequently razed in early 1930. At the time, the main building was considered the largest wooden factory building in Connecticut. The property became part of Farrell-Birmingham’s Derby Plant, located just below the site, and it is now part of the Home Depot complex, which opened April 26, 2001.

The Sterling names lived on, however, as the labels were purchased by the Winter Piano Company of Brooklyn, NY, who continued to manufacture pianos bearing the name.

The Huntington Piano’s building became a warehouse. Another fire on December 23, 1932 destroyed the top two floors, which were removed, making it a 3-story building. It subsequently became the quarters of the Shelton Community Club, and finally the Headquarters of the Boys and Girls Club of the Lower Naugatuck Valley, and it was in this capacity that the old building was destroyed in an arson fire in 1991. A five story senior housing building called The Ripton was now occupies the site.

The Derby Historical Society fields more inquiries on Sterling and Huntington pianos and organs per year than any other Valley-made product. This is a testament to the quality of their workmanship - since the last piano was made over 75 years ago. The Society has the ability to date most existing pianos, as long as their serial numbers are known.

While we welcome e-mail inquiries, please note the following:

We cannot, under any circumstances, assess the monetary value of a piano.
We are not, unless there is something extraordinary connected to the piano, accepting donations of pianos or organs.
Our knowledge is centered on the Derby-made pianos. If your piano says "Brooklyn", "New York", "Winter", or "Aeolian", or has a 6-digit serial number, our knowledge is far more limited.
Over the years, we have seen a couple examples of Derby-made pianos refurbished by Winter or Aeolian. So if your piano says "Derby, Conn.", on it anywhere we may still be able to help you.
Further sources: