Parking is located in the rear of the building 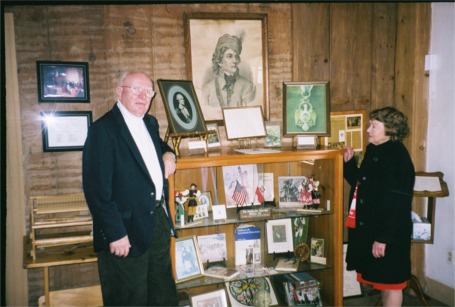 Part of the Kosciuszko display at the Humphreys House, Joseph Warzala (l) and Ceil Rafalowski (r)

Possibly the most humane and kindest of all the Europeans who brought their scientific and military skills to aid the cause of our new, young nation was the Polish patriot, Thaddeus Kosciuszko. His skill and wisdom was responsible for several Revolutionary War victories. His great engineering ability built West Point and other important edifices which are now shrines of American heritage.

A firm and dedicated believer in the rights of human beings, Kosciuszko spent his entire career in an attempt to further this noble cause.

It is stated that upon receiving a high military rank on the colonial army, he was assigned a slave, where upon Kosciuszko immediately set the slave free, and aided in his education and advancement.

In one of the first efforts to abolish slavery in America, Thaddeus Kosciuszko in his will left his entire fortune to free and educate slaves. The following is a copy of that famous document.

"I, Thaddeus Kosciuszko, being just in my departure from America, do herby declare and direct that, should I make no other testamentary disposition of my property in the United States, I hereby authorize my friend, Thomas Jefferson, to employ the whole thereof in purchasing negroes from among his own or any others and giving them liberty in my name, in giving them an education in trades or otherwise, and in having them instructed for their new condition in the duties of morality which make them good neighbors, good fathers, and mothers, husbands or wives, and in their duties as citizens, teaching them to be defenders of their liberty and country, and, of the good order of society, and in whatsoever may make them happy and useful; and I make the said Thomas Jefferson my executor of this."

A copy was placed in the Polish National Museum at Rapperswil, and Europeans came to see what at that period was considered the most humane social document.