Parking is located in the rear of the building

The Humphreys House is the birthplace of the Revolutionary War officer and friend of George Washington who later became our nation's first ambassador. It serves as the Society's headquarters, as well as home of our unique Day in 1762 Program. More than just a wonderful interactive tool for educating our region's children, the Humphreys House is also a museum dedicated to its famous resident and the community he called home.

History of the Humphreys House & its Occupants

In 1690, the town of Derby voted to build a new house to serve its minister. At that time, it was the town’s responsibility to hire and maintain a minister, and a house was necessary to attract one. A house had already been built for the Reverend Bowers, but his widow continued to occupy it after his death. Not about to throw a widow of a departed minister into the street, the town voted to erect a new house. The General David Humphreys House was finished in 1698, though construction may have started as early as 1695. It is referred to as a “Mansion House” in old Derby land records.

The first occupant was the Reverend John James, who also served as town clerk and was the first school master. Born in Wethersfield, and a Harvard graduate, Rev. James served from 1694 to 1706. He resigned for health reasons. Although Derby voted to give him the house and land outright, James returned to Wethersfield, selling the house to Reverend Joseph Moss.

A New Haven native, Rev. Moss graduated from Harvard in 1699, and received a degree from Yale in 1702. Although he commenced preaching in Derby almost immediately after Rev. James' resignation, he declined ordination until 1707. He was an active farmer, and worked toward the improvement of Derby's public schools. He also served as Derby's Town Clerk. Moss served the parish for a number of years until his own death on January 23, 1731.

Rev. Moss was predeceased by his first wife, Dorcas Roswell. His second wife, Abigail Russell, continued to reside in the home after his death. The house was rebuilt to roughly its present dimensions in the 1730s, though it is unclear if it was the Widow Moss (who was a woman of means) or the Humphreys family who reconstructed the home.

After Moss’ death, there was some debate on choosing a new minister, which lasted for some time. This was partly because of the split between the traditional “Old Light” and the fire and brimstone “New Light” philosophies in the Congregational Church. The town eventually hired Rev. Daniel Humphreys of Simsbury, a New Light, in 1734. Rev. Humphreys bought the house from Abigail Moss around 1735.

Partly in reaction to the split in the Congregational Church, a number of Episcopal churches were organized in Connecticut about this time. Derby’s small  Episcopal church was completed in 1746, across the street from the Humphreys House, and a cemetery developed around it. The church was used until a second, larger edifice was completed down the hill in 1799. Shortly after the second church was dedicated, the first church was moved (a common process back then) across the street and was connected to the Humphreys House, although the cemetery remained. We know the former church had to be moved after 1799, but before 1820, because Reverend Richard Mansfield, who served the church from 1748 to 1820, is buried where the pulpit once was. The addition served as a summer kitchen - a quantum leap in the early 19the century which removed the hot cooking process from the home's main, central hearth, to a self contained, ventilated side of the house.

Getting back to Rev. Humphreys, in his day there were two major settlements along the east banks of the Housatonic and Naugatuck Rivers in the Old Town of Derby. The Narrows, along today's Route 34, was an area which thrived on shipping, ship building, and commerce. Uptown was a more affluent section, and contained the Town Green on Academy Hill.

Elm Street, where the Humphreys House is located, was part of Uptown. The house was beautifully furnished, and was the focal point of many social gatherings. Rev. Humphreys married the widow Sarah Riggs Bowers in 1739. She was called “Lady Humphreys” for her aristocratic bearing and demeanor, as well as her great beauty and intelligence.

Daniel and Sarah had four sons and a daughter, all of whom survived into adulthood. The fourth son, General David Humphreys, was born here July 10, 1752, on a hot, sultry day, when the flowers in the garden Lady Humphreys tended were drooping, parched, and wilted from the heat. Gen. Humphreys served as aide-de-camp for George Washington during the American Revolution, was our nation’s first ambassador to a foreign country, and founded one of America’s first ‘factory villages’ in modern day Seymour. Although David Humphreys never owned the house which became his namesake, it was his his family's ancestral homestead his entire life - the place he always returned due to the fact he never owned a substantial homestead of his own. Although we cannot claim his friend George Washington slept here, reportedly General Thadeusz Kosciuszko, hero of both the American and Polish Revolutions, apparently did visit David at the house.

Rev. Daniel Humphreys, died September 2,1787, having been the town’s Congregational minister for 54 years. His beloved wife predeceased him by only five weeks, departing on July 29, 1787.

David's older brother John (1744-1807) lived on 71 Elm Street, and the John Humphreys House is part of the Ansonia Historic District.

Another brother, Elijah (1746-1785), was a Major in the Connecticut Militia during the Revolutionary War, and had three horses shot out from under him. He married Anna Mansfield (1756-1841), the daughter of Rev. Richard Mansfield, in 1774. It must have been true love - the son of the Congregational minister marrying a daughter of the town's Episcopal minister - on the eve of the Revolutionary War, with the families finding themselves on opposing sides.

When Rev. Mansfield was forced to flee Derby due to his Tory sympathies, it was Elijah who convinced his father-in-law to return to Derby on condition he preach under guard. Fearing rough and disrespectful treatment at the hands of common soldiers, it was arranged that Elijah and his brother John would personally guard Derby's distinguished Episcopal minister - probably as much to protect him from angry townspeople as to prevent him from publicly speaking against the American cause.

Elijah and Anna resided in the Humphreys House their entire lives, caring for Daniel and Sarah in their old age. They had five children of their own. Elijah died at sea in 1785, and was buried on Martinique. Ironically, he has two memorial tombstones - the Humphreys family erected one at Uptown Burial Ground, and the Mansfield family put one at the Episcopal Cemetery!  The home was willed to Elijah's son Elijah Jr. (1779-1834). He in turn sold the home to his sister Betsey (1781-1864) and her husband Thomas Vose, on the condition that their mother Anna Humphreys be allowed to remain there the rest of her life.

Thomas Vose (1772-1845) was an affluent sea captain, and David Humphreys' major business partner in the Humphreysville venture. He sailed the first steamboat, the General Lafayette, up the Housatonic to Derby in 1824. The home was known as "The Captain Vose Place" for much of the 19th century. Following the Mansfield family traditions, Thomas and Betsey were strict Episcopalians, which probably explains how the old Episcopal Church was attached to the former Congregational parsonage in the first decade of the 1800s. It was also Thomas Vose who constructed the dry-laid retaining wall in front of the Humphreys House. The family is buried across the street in the Episcopal Cemetery. 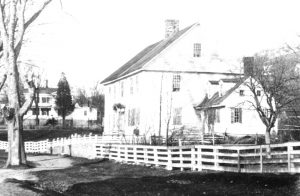 The Humphreys House in the late 19th century. The Remer House is beyond.

Albert Sherwood, of Derby, remembered the Humphreys House and its occupants in the mid 19th century, recalling "I knew two of these children of Elijah and Anna Mansfield Humphreys, viz.: Sally, widow of Judge Austin, and Betsy, widow of Thomas Vose. They were very old when I was a boy. They died respectively in 1864 and 1865. They were dear, delightful old ladies, and although residing in and owning the old homestead of their grandfather Humphreys, the Puritan divine, were the most devout adherents of the Episcopal Church".

The house then became the property of Abby Ann Sherwood, a relative. The house finally left the extended Humphreys family when it was sold to Thomas Hennessy in 1885. Albert Sherwood, now an attorney, handled the transaction, and he later recalled in his 1924 book Memories of Old Derby: "As administrator of the estate of Thomas Vose Sherwood, a great grandson of Dr. Mansfield and the last to inherit from the old stock, I signed and executed the title deed which conveyed this property into the possession of strangers after it had been owned and occupied by these aristocratic old time families and their descendants for one hundred and fifty years". 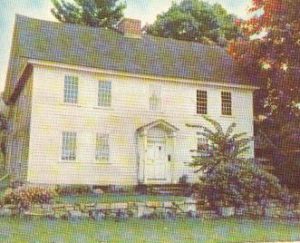 In The Life and Times of David Humphreys (New York and London: G.P. Putnam’s Sons; by Frank Landon Humphreys; 1917) the author states “this dwelling still stands pathetic amid its neglected grounds, yet bearing marks of its ancient stateliness... only two great elms now remain of the row which fringed the boundary of the property along the road. No trace of the gardens is left save some irises, narcissi and other flowers of   the bulb variety- which defy man’s ingratitude and come up year after year in the bed on the east side of the house and beneath the parlor windows...In the window panes, here and there are a few of the ancient lead ornamentation’s which descended like garlands from the top panes...The old brass knocker was wrenched off by some vandal, as recently as the spring of 1902”.

Ansonia historian Mrs. Mabel Stivers, whose articles on the Valley's old houses graced the pages of the local newspaper Evening Sentinel in the 1920s, resided in the house a couple years until her death in 1930. She is also credited with spearheading the drive to restore the ancient Bare Plains Cemetery on Wakelee Avenue in Ansonia.

The house became part of the City of Ansonia in 1889, and it is recognized as that municipality's oldest structure. As early as 1955, the Historical Society was on record as favoring preservation of the old home. For many years, the house was in possession of the Humphreys House Association, organized by several public minded persons for the purpose of preserving the old house, which had been converted into a three family apartment. The Home Trust Company of Derby served as trustee, collecting rents and paying bills. The house was turned over to the Derby Historical Society as a Public Trust by the Superior Court of New Haven in September of 1961. This action occurred only two months after the Commodore Isaac Hull House, an equally important local landmark on Derby's Commerce Street, was razed. 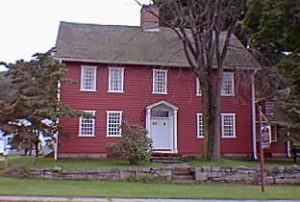 The Derby Historical Society unanimously voted to restore the Humphreys House on June 4, 1964. Much of the Society’s holdings were stored in the upper floors of the Howard and Barber building on Main Street, Derby (razed in 2003). Extensive renovations began in 1976, and the house was the City of Ansonia's Bicentennial Project. The restoration totaled $162,000. The David Humphreys House opened to the public with much fanfare, on May 3, 1980. Thousands visited the first weekend. The Day in 1762 Educational Program began later that Fall.

Today, Humphreys House serves as the headquarters of the Derby Historical Society. It has been restored to its mid eighteenth century appearance, incorporating elements of Lower Naugatuck Valley history from the pre-colonial, colonial, revolutionary, and federal periods. Three times a week during the school year, the house hosts fifth grade classes for the Society’s acclaimed Day in 1762 Program, an interactive, role-playing program which allows children to experience life as David Humphreys would have when he was their age.